At the early hour of 4 am last Friday morning I got in the car with my host family to drive to Guatape. Guatape is a beautiful village on a big lake near the city of Medellin… a 7-hour drive away.

Many hours later, as we neared Guatape, I was surprised to watch the landscape change dramatically. Rainforest gave way to mountains covered in pine trees. The weather was drier and more temperate, it almost reminded me of upstate New York or Vermont. 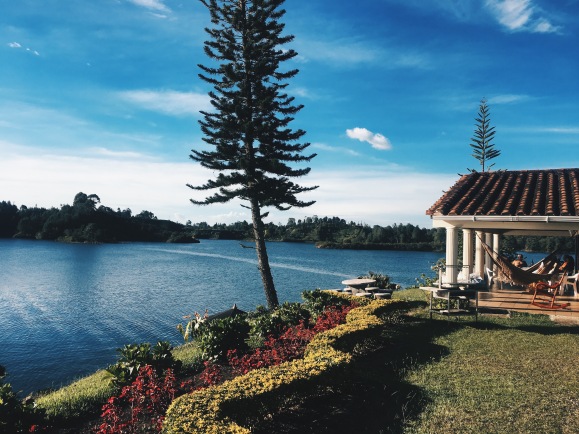 Gratefully, our house for the weekend more than made up for the long journey, perfectly situated right on the lake. Plus, it had a wraparound veranda scattered with comfy seats and hammocks ideal for admiring the amazing view.

Once we got settled, we took the speedboat out on the lake for an hour to explore the area. The Peñol-Guatapé lake is one of the country’s largest, and it is technically a reservoir as it was man-made in the 70s to power a hydroelectric dam (providing 30% of the country’s electricity). As a result, it doesn’t have the normal topography of a lake. Instead of a wide expanse of water, where there were once mountains and hills are now small islands that dot and squiggle the water. 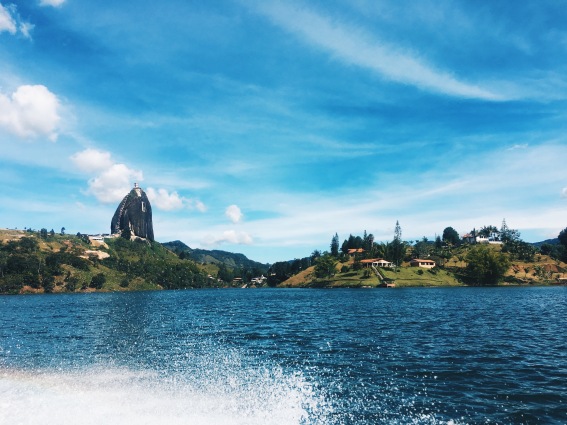 As we sped around we admired ultra-modern houses perched above the water and passed local landmarks such as the remains of the infamous Pablo Escobar’s lakeside mansion or the former site of Viejo Peñol, a town that was submerged in the creation of a reservoir, now marked by a giant memorial cross.

For the rest of the evening, we relaxed on the veranda, talking or reading in the hammock as the sun set over the lake. The weather was cool and refreshing and it was mesmerising to watch how the purples and pinks of the sunset reflected on the water’s surface, and later, watch the sparks of lightning illuminate the mountains far in the distance. Since I’ve arrived in Colombia that is the moment when I’ve felt the most relaxed and at home.

Truly, I’ve found that water has this magical influence. Somehow it removes you from the world and puts your mind at ease, even for just for a little while. I woke up early on Saturday morning and opening my curtains to see the lake, sparkling in the morning sunlight, instantly calmed me. I forgot about needing to get dressed or what I was going to do during the day, I was just there, watching the water.

However, I spent most of the day enjoying the water by playing in it. Along with renting the speedboat, we had also rented a bunch of water skis. My favourite was basically like a miniature surfboard which you kneel on, and then hold the harness attached to the boat as it pulls you along. I had never tried water skiing before so I failed miserably the first few times, but I got the hang of it soon enough (along with a number of scrapes and bruises). I’ve always loved the thrill and adrenaline of water sports, whether it be sailing, surfing, jet skiing, kayaking and it was great to add another one to the arsenal. I had forgotten how much fun it was to be on the water, how much there is to do, from swimming to speed boating. Being on the water you get this sense of freedom and clarity of mind that you can’t get anywhere else, it’s addictive. I dream that one day I’ll  live by the water, so I can wake up and know that beauty and freedom is only a few steps away.

In the afternoon we drove over to El Peñon de Guatapé, commonly referred to as La Piedra (the stone), and it is exactly that: a 200+ meter high rock that towers over the surrounding area.  They think it was formed by volcanic eruptions but no one really knows. Luckily (or not so luckily) for us, they built stairs into the rock so that you can hike the whole 745 steps to the top. We waited until it was cooler in the late afternoon and began the climb. It was harder than I expected, partially because of the altitude; I could feel my heart beating in the base of my throat and at one point my head was throbbing. But we kept going, and slowly but surely we reached the very top, and it was more than worth the effort.

At the top of La Piedra was a small tower, at the top of which was a viewing platform with 360-degree views of the surrounding area. We were so high that we watched clouds float past us at the same height and could see birds, no bigger than a speck, flying far below. As we reached the top the sun was beginning to set, so while we rewarded ourselves with fresh mango and ice pops we admired the way the orange sun lit up the water and turned the sky a rainbow of colours (and of course took lots of photos). The whole trek was exhausting but in the most wonderful way, the type of happy exhaustion brought on by accomplishing something unforgettable.

That evening we went back to the house and had steak on the grill with rosemary potatoes and I can’t remember steak every tasting so good (I think I had 3). Part of it was the delicious flavour, part of it was because I was so hungry, and part of it was because of the moment, the setting of the lake, the amazing day that led up to it. We had plates of fresh fruit and cake afterwards and I have never felt so full and completely content. As far as perfect days go, it was pretty high up there.

Sunday morning we drove over to explore the small town of Guatape. It is probably the most beautiful town I’ve ever been to, every house is painted in a rainbow of colours with colourful murals on the bottom, called Zocalos. There are many towns in Colombia known for their beautifully coloured houses, but the murals are unique to Guatape. Every house is responsible for maintaining their own zocalos, and the murals are a mix of religious images, drawings describing shops (a bakery would have loaves of bread on their murals), flowers, and icons from the local area. 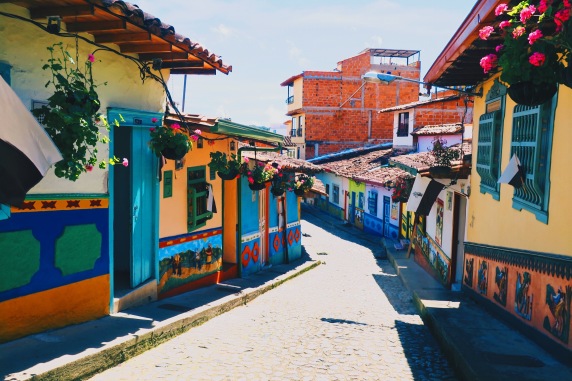 We spent the morning wandering down the winding cobbled streets, exploring the local shops selling souvenirs, and taking way too many pictures before we went back to the house. We had to leave at one so we would get back before nine, but I still managed to fit in some tubing with the speed boat before we left.

As we drove back to Manizales on the winding mountain roads I admired the bit of tan I had acquired over the weekend (I had slathered on the 50 SPF sunscreen constantly but the sun still got me). It felt good, like all the positive changes I felt happening internally were manifesting on the outside. I’m not a different person, but I feel Colombia changing me,  forcing me into the present moment and away from my worries, forcing me to simplify and at the same time become gain so much. It’s a great feeling. I guess it just shows what a little water, great company, and a giant rock can do.

Welcome to my slice of the internet! I'm a traveller, journalist and creative sharing my misadventures and musings.

What I’ve Been Reading